Since its beginning in 1996, EMC Foundation, the philanthropic arm of the company, has given over $1,000,000 to local and area non-profits. Their philosophy is reflected in this quote from G. Donald Gale, who offers this insight to giving: 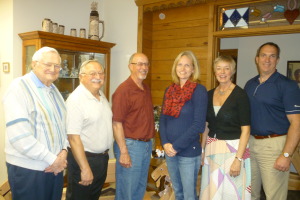 Diane Ballweg is the president of the Endres Manufacturing Co. (EMC) Foundation, which helps direct $100,000 to nonprofits each year. She is also involved with 20 different boards and organizations around Madison, and she was a lead donor to The Stream, Edgewood College’s stunning new visual and theater arts center.

Gordy Acker served in the Army Reserves for six years. Gordy worked 39 years at Endres Mfg. Company as a welder. During that time, Gordy volunteered on the Waunakee Fire Department for 29 years. Now, during his retirement, he is involved with the Waunakee Food Pantry, EMC Foundation Board, St. John Cemetery Committee. He loves watching his grandchildren’s soccer games and he enjoys traveling with his lovely wife Jean.

Mike graduated from the UW-Madison with a B.B.A. in Accounting and is a partner with Wegner CPAs. As a Partner in the firm’s Tax & Business Services Department he leads Wegner CPAs’ Manufacturing/Supply Chain practice group. With more than 25 years of experience in public accounting, he has worked with a broad cross-section of clients. He is involved with several community non-profits in his community of Waunakee.

Annie is the Secretary for the EMC Foundation. She received her undergraduate degree from UW-Madison and her Master’s of Education degree from Boston University.  She was a high school guidance counselor in Boston and Malibu before moving back to her hometown of Madison.  She is the founder and President of Train2Race, LLC which trains athletes for endurance athletic events. She is presently a board member of the Waunakee Public Library and the Young Leaders Board for the American Family Children’s Hospital.  She is married to Sam Ballweg, President of EMC, and they live with their three children in Waunakee.

Nick graduated from St. Norbert College with a degree in Accounting and a minor in Spanish. Nick was born and raised in Madison and is now part of his family’s investment team at UBS. His team works closely with small business owners, individuals and families to help understand their investment needs and financial goals. Prior to UBS, Nick worked in the public accounting industry for 5 years by providing a wide range of technical accounting and audit services to his clients. In Nick’s free time, he continues to be a positive role model for his “Little Brother” through his involvement in the Big Brother Program, which began in 2008. He also enjoys attending sporting events, running, playing tennis and boating.

Jackie graduated from UW-La Crosse with a degree in Accounting. She is in charge of Accounting and Human Resources for Edge Consulting Engineers. Prior to Edge, Jackie worked for Thrivent Financial as a Licensed Financial Assistant. She is a member of the women’s group at her church and served as Treasurer and President. She served on the Grant committee for Grade School Partners in Education. Jackie enjoys camping, volleyball, and attending her children’s sporting events. Her husband, Nick, has worked for EMC for over 22 years.