Endres Mfg. Co. finds itself in a rare field, a family business, entering its fourth generation. Statistics show that only about 3% of family businesses ever reach that level. This is a look back at how Endres Mfg. got to this point.

Lawrence M. Endres Sr. was born in 1884 and raised in Martinsville, Wisconsin. After beginning his entrepreneurial career with several patents and a small business with his brothers, he branched out on his own and founded L.M. Endres Manufacturing Company in 1926 at 305 West Street in Waunakee. He found early success with his many inventions, including sixteen patents. Some of his more popular inventions were his folding drawbar and his disc sharpener. In 1930 the business was incorporated and the name changed to Endres Mfg. Co. 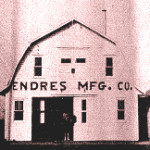 Larry Jr. was born in 1924 and started his tenure at Endres Mfg. when he was only six. In 1938 Larry bought the company’s first Sears & Roebuck welder for $96. Larry invented his own variation of the folding drawbar in 1940 and attempted to patent it, but was too young. Due to World War II Larry enlisted in the service in 1943 and was forced to close the doors of the company. When he returned, though, he got right back to work. He invested in a truck and started fabricating steel beams for the residential market. This was the beginning of the structural steel business which today makes up over 95 percent of company sales. Larry also began the pier business when a friend asked him to build him one. It was an opportunity to keep employees working during the winter months. Although the shoreline business is only about 2 percent of sales today, it provides company exposure to the non-construction community.

Larry married Leona Wallin in June 1950 after Lee had completed nursing school, and they lived with Larry’s parents until 1953 when their first child, Diane, was born. Lawrence Sr. was in late stages of Parkinson’s disease by this time, and he died in November of that same year. When Lee and Larry’s son Ronald was born in 1957, Lee gave up her nursing career and became the first full-time bookkeeper at Endres.

One of Endres Mfg. Company’s biggest jobs during this time was for Madison Gas & Electric. Endres employees welded most of the original natural gas lines for Waunakee and many neighboring communities.

In 1966, after several additions to the original location (which still exists on West Street), the need to expand pushed Larry to purchase an agricultural lot in Westport, on Century Avenue, on the southwest edge of Waunakee. The new shop was four times the size of the original facility. This location was used only for storage until 1968 when the old location was sold and the entire business was moved to the new location. When he moved to Century Avenue he promised to make the new business become a welcoming host to those entering the village. So, Larry used his creative talents to give the shop a Bavarian theme to reflect his German heritage. He also added a park on the south side called, “Kappel Park” after the chapel in the back corner. The chapel was a replica of one his great-grandfather, John Endres, had built in the Wisconsin town of Berry a century earlier.

In 1965, Ken Ballweg started working part-time at the shop while attending UW-Madison. After graduation he served a term in the Army Reserve and then returned as a full-time employee. While working at Endres he met Diane and they were married in January 1974. 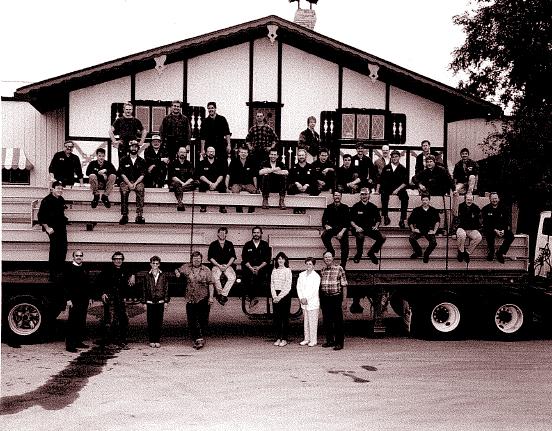 The job that Endres regards as being a defining factor in its history was the new Madison Post Office in 1974. This job helped to define them as a leader in their field and gave them a presence in the community.

In 1982 the goats were introduced to Endres Mfg. as residents in the park from Memorial Day through Labor Day. Unfortunately, they were not welcomed by neighbors because of the noise and smell. But Larry was not deterred. After a short time away, the kids returned in 1990 and have become the company mascot, logo, identity, and a miniature petting zoo for the entire community. 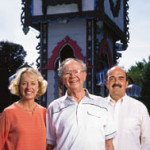 In 1990, Larry decided to step down as president, and formally gave the reins to his son-in-law Ken Ballweg. In 1995, Endres Manufacturing joined the Steel Plus Network and was selected Fabricator of the Year by this international organization for steel fabricators. In 2003, Ken was awarded the prestigious Bob Coffey award in recognition of his leadership and contributions to the Steel Plus Network. From a barn on West Street, Endres has grown to an internationally renowned model for superb steel manufacturing and fabrication. Buildings with Endres steel are recognized throughout the area, including such sites as the new Madison Downtown Library, Overture Center, American Family Children’s Hospital, the renovated Edgewater, buildings on the Epic Campus, and facilities for Edgewood College, Madison College and the UW System.

It is part of the EMC mission to give back to the community through scholarships, sponsorships, equipment for the local fire department and EMS, Oktoberfest celebrations, Easter egg hunts, goat races, parade floats, and donations to organizations. The 75th anniversary was celebrated in 2001 with a community party and an invitation for all to tour “Waunakee’s oldest industry.” The company also gives back to its employees through such creative events as Christmas parties, golf outings, softball picnics, and Brewer, Mallard and Badger games.

Plagued with a variety of health issues, Larry died the day after Christmas 2006 in his sleep at the age of 82. Each generation has built the business through unique strengths and skills. Lawrence Sr. was an entrepreneur and inventor. Larry Jr. was hard-working and creative. Ken Ballweg is analytical and quick-thinking. Sam Ballweg brings modern technology and business innovation to the table. And they are supported by dedicated family and employees.

Now the fourth generation is starting to make an impact on the company. Ben, Sam, and Kate Ballweg have all spent summers working in the office, painting signs in the park, driving deliveries, leading safety and certification evaluations, and helping with company events. Sam returned to Endres in the summer of 2004, after graduating from Boston College and gaining work experience from similar business organizations in California. Ken assumed the title of CEO and handed the title of Company President to Sam in 2013. Sam currently lives in Waunakee with his wife Annie, who is a board member for the EMC Foundation, and they have three active kids, Michael, Brandon and Brooke. Kate and Ben are both living in the Madison area and continue to be involved with the company board. Diane is involved in a variety of boards and foundations from local to international, as a pilot she teaches aviation at Edgewood High School, and chairs the EMC Foundation.